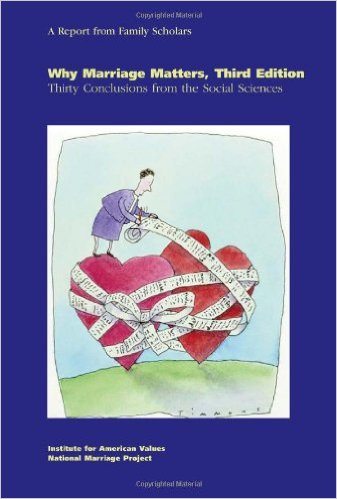 The Rise of Cohabitation

On August 16th, 2011, the 3rd edition, in their Why Marriage Matters (a joint publication of The National Marriage Project and The Center for Marriage and Families) was released. This report subtitled, “Thirty Conclusions from the Social Sciences,” puts most of its focus on the issue of cohabitation.  The report starts with a startling observation:

Today, the rise of cohabiting households with children is the largest unrecognized threat to the quality and stability of children’s family lives.

The report explains that cohabitation has seen an unprecedented fourteen-fold increase since 1970. A child today is more likely to spend time in a cohabiting household than experience their parents’ divorce as reflected in the following chart: 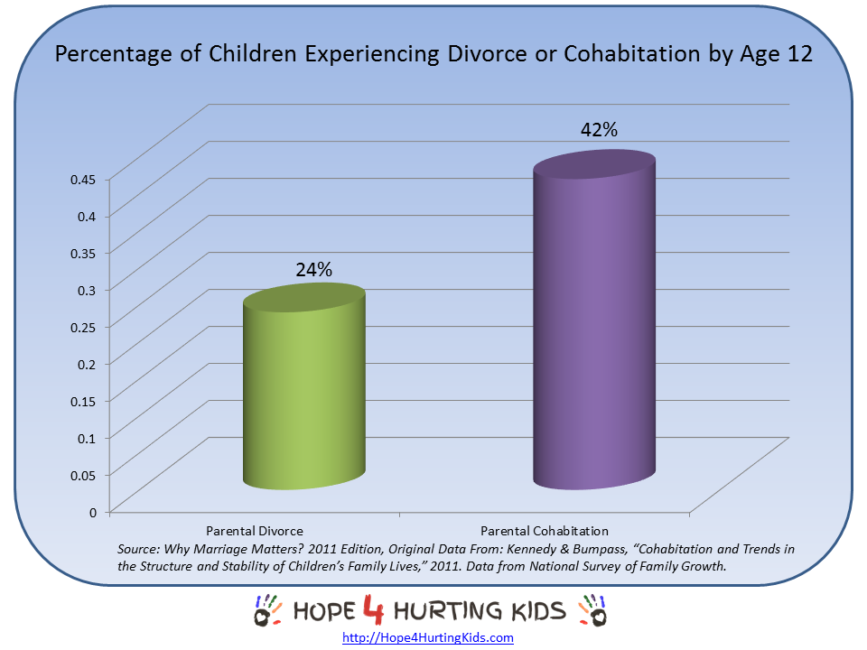 Today, approximately 24 percent of children are born into a cohabiting household. Additionally, 20 percent more children will spend sometime in a cohabiting household with an unrelated adult some time during their child. That means that a more than 40% of children will experience a living situation that includes cohabitation. It is easy to see why this is an important issue when it comes to ministering to children.
Several weeks ago, we looked at various statistics related to divorce in general and children of divorce specifically.  Those charts reflect that divorce has actually declined in recent years, and consequently the number of children experiencing divorce, while still high, has also declined.  Part of the reason for those declines has been the increase in the instance of cohabitation.  The Why Marriage Matters report confirms:

Children who are now born to married couples are actually more likely to grow up with both of their parents than were children born at the height of the divorce revolution…In fact, the divorce rate for married couples with children has fallen almost to pre-divorce revolution levels, with 23 percent of couples who married in the early 1960s divorcing before their first child turned ten, compared to slightly more than 23 percent for couples who married in the mid 1990s.

The report surmises that,

…cohabitation has emerged as a powerful alternative to and competitor with marriage.

So, what?  Why does a report on cohabitation matter to a ministry that ministers to children of divorce and their families?  Why are we even talking about this?  The fact is that children from cohabiting relationships share many experiences with children of divorce.  Let’s look at a few.

For example, the report tells us that, in the United States, children who are born to cohabiting couples are 170% more likely to experience a break-up than children of married couples.  Have at look at this chart from the publication which shows the percentage of breakups for children born into married versus cohabiting relationships. 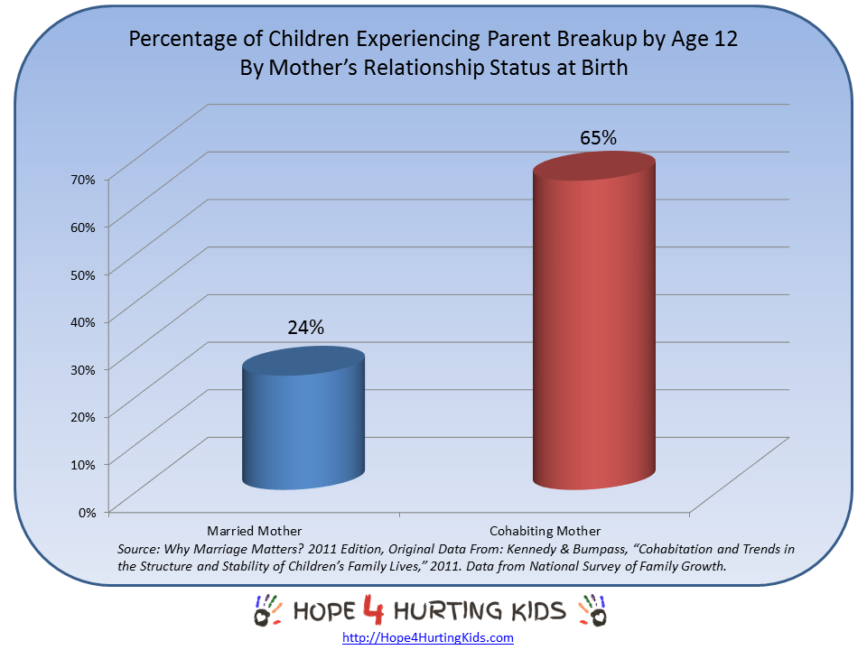 The chart above indicates that 65% of all children born to cohabiting parents will see their parents breakup by age 12 compared to “just” 24% of those who parents are married at the time of their birth.

Furthermore the report explains that a child born to other than married parents is much more likely to experience what they call “maternal partnership transition” (defined as the end or start of of a relationship) at a very early age.  Consider the following graphic. 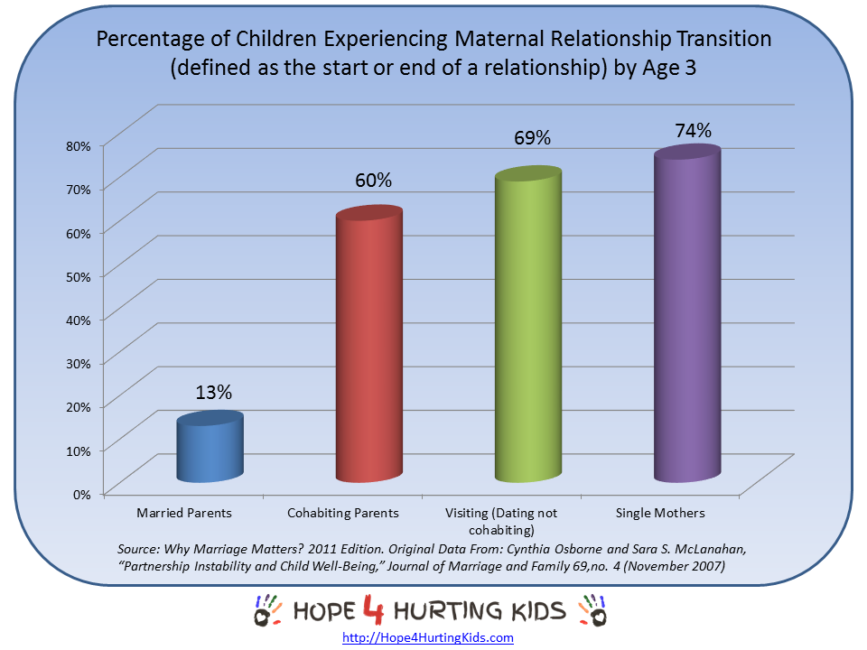 I find two things extremely striking about this graph.  First, the 13% of children who experience divorce is astounding.  That means that one in every eight children will see their parents divorce in the first three years of their life.  However, compared to the rates for cohabiting parents and single parents, the divorce rate almost pales in comparison.  60% of children born to cohabiting parents will see their parents separate by age 3.  There is no denying today the number of children who live lives of turmoil as their parents enter into and leave multiple relationships throughout their childhoods.

In a world where a marriage certificate is referred to as “just a piece” of paper, it is naïve and hypocritical to imagine that the effects of parental break-up are somehow different on a child when that piece of paper does not exist.  The report confirms that:

The Effects of Cohabitation

Why Marriage Matters confirms that children of cohabiting couples fare worse than children in intact, married families, but the news is even more startling than that.  Consider,

On many social, educational, and psychological outcomes, children in cohabiting households do significantly worse than children in intact, married families, and about as poorly as children living in single-parent families.

In addition to these impacts, the rise of divorce, cohabitation and other alternatives to marriage has given rise to much turbulence and complexity in the lives of children.  With the relative instability of cohabiting relationships and children oftentimes living with half-siblings, stepsiblings, step-parents and people unrelated to them by either birth or marriage, “life typically becomes not only more complex, but also more difficult.”

The Increased Risk of Abuse

The report notes that:

The statistics cited in the report are staggering and frightening, and I believe that they warrant their own article as those of us who work with children must understand the pervasiveness of abuse and be equipped to look for the signs of abuse.

Statistics Are Indicators not Predictors

The report is also quick to point out the these statistics are not a predictor for any individual child in a cohabiting relationship.  While there is increased risk associated with these types of arrangements, not every kid in such an arrangement will experience the negative reactions.  For example, the report explains:

…one nationally representative study of six to eleven-year-olds found that only 16 percent of children in cohabiting families experienced serious emotional problems.  Still, this rate was much higher than the rate for children in families headed by married biological or adoptive parents, which was 4 percent.”

Based on my research in divorce studies, I would point out that although the number is “only” 16 percent, it is still four times higher than intact families.  And, without reading the study itself, the conclusion seems only to address “serious emotional problems.”  This leaves room for an even greater number who struggle with something less than “serious emotional problems.”

Regardless of what you think about the issue of cohabitation itself, it is time that we admitted that the children of these arrangements face heightened risks and a wide variety of issues.  As those concerned with serving children of divorce, we must include children who come from cohabiting relationships in our vision and mission.

To purchase a complete copy of the report, click here.

This article is updated and adapted from an article originally published on Divorce Ministry 4 Kids on September 07, 2011.

Written by Wayne Stocks
Wayne is the founder and executive director of Hope 4 Hurting Kids. He is a happily married father of four kids with a passion for helping young people who are going through rough times. In addition to Hope 4 Hurting Kids, Wayne previously started I Am A Child of Divorce and Divorce Ministry 4 Kids to help kids who are dealing with the disruption of their parents' relationship. These are now part of Hope 4 Hurting Kids. Wayne speaks frequently at conferences and churches on issues related to helping kids learn to deal with difficult emotions and life in modern families. Wayne lives with his wife, three youngest kids, three dogs and an insane collection of his kids' other pets outside of Columbus, Ohio. In addition to his work with Hope 4 Hurting Kids, Wayne is a partner in a local consulting firm, an avid reader, coaches his son's soccer team and is a proud supporter of Leicester City Football Club (and yes, for those in know, his affinity for the club does predate the 2016 championship). You can reach Wayne at wayne@hope4hurtingkids.com.
« Previous post
Helping Children Deal With Anxiety
Next post »
Divorce Hurts